Considering Offering Solar to Your Customers? 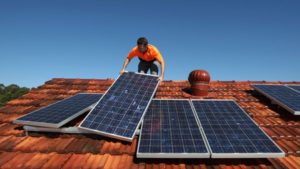 Replacing climate control systems is not a question of “if” but “when” for home and business owners, since the lifespan of equipment is usually only 10 to 15 years. Heating and cooling can account for a large portion of utility bills, so HVAC companies that provide solar compatible units and panel installation could help their customers save money and protect the environment. Solar is a profitable service for many HVAC businesses; Statistica predicts that the residential solar PV market in the United States will be worth about $3.7 billion by the end of 2015.

Some businesses have seen substantial growth after adding solar to their services. For example, Halco added solar to their business offerings in 2009 and by late 2014 was projecting that sector would reach $4 million in annual revenues, reported ACHR News. If, as a business owner, you are still considering offering solar to your customers, there are many reasons to think seriously about it.

A report from The Refrigeration School noted that:

In addition, TechRepublic says that 25% of all rooftops are candidates for solar energy installations. That is a substantial amount of potential new business for HVAC company owners to pursue.

Given the prospects for the technology in 2015 and beyond, offering solar could prove profitable for your customers and your business. There is, however, one proviso: what happens with the investment tax credit for solar, which is discussed below, may affect the economics of solar power.

The Solar Energy Industries Association (SEIA) is making a major push to continue the investment tax credit that supports solar energy installations. Without renewal, the Solar Investment Tax Credit expires in 2016. It provides a 30% tax credit for homeowners and commercial property owners that install solar systems. The SEIA says that the tax credit helped solar installations grow by 1,600% since 2006.

The House of Representative is evaluating a proposal to extend the credit through 2021, reports Bloomberg. Even without it, the solar industry would likely continue to advance, albeit more slowly.

The Future of Solar Technology

The future of the solar energy industry looks bright, thanks to technological advancements in the materials used to make photovoltaic solar cells:

These developments could make the cost of solar panels much less expensive in the future, which could counteract the impact on the market if the tax credit isn’t renewed. Statistics from the Department of Energy tell us that air conditioning uses about 5% of the total electricity consumed in the United States, costing homeowners $11 billion a year. One superb part of this opportunity for the owners of HVAC companies is the installation and maintenance of solar-powered air conditioners.

Is Solar Right for Your Business?

The solar energy industry needs to be viable even without the tax credits. The increasing demand for solar installations, combined with the lower costs of the equipment, should make the prospects excellent for HVAC companies working with solar. Renewing the Solar Investment Tax Credit would align with the widespread government initiatives to curb carbon emissions and the EPA’s Clean Power Plan. Decreasing equipment costs and tax credits could significantly lower the cost of solar. With or without the tax credit, it’s worth considering adding solar services to your company’s offerings, as switching to clean, sustainable energy sources is the way of the future.